“Rattles along splendidly. See you in court.”

“Lurid, disrespectful and untrue. This book is a cynical distortion of a world all honest development workers know and love. A deliberate and cruel mangling of the facts.”

In a Sorry State: Excerpt

The pool at the Imperial was closed. It was leaking apparently, ‘into the rooms below’ according to the cheerful attendant. So, to get a swim, Baxter had to make his way to the Serena, the only other pool around. The Serena is a different kind of gaff to the Imperial. As he walked up the long bougainvillea-lined drive, Baxter’s first sight of the place put him in mind of a Columbian drug boss’s retirement villa, something out of Sam Peckinpah. He expected to see hirsute men in sombreros and dark-eyed senoritas with castanets but the lobby was instead heaving, like everywhere else in the town it seemed, with workshoppers and consultants. The only contrast, and it wasn’t much, came from the occasional tour group, mostly overweight persons with mullet haircuts and a dress code leaning towards standard battle dress: khaki hats, knee-high boots and binoculars, as if they were hoping to find wildlife in the hotel grounds or as if they anticipated an attack by a local insurgent group, maybe the notorious Lord’s Resistance Army with its infamous traditions, explicated at length the day before by Faith, of cutting up girl children and making magic charms from their genitals.
Read more 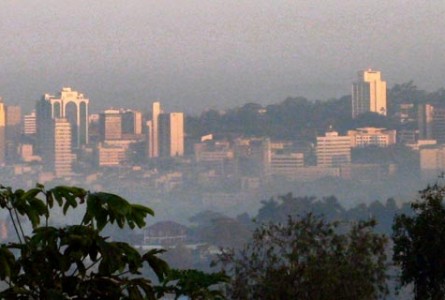 In a Sorry State

JAMES JOUGHIN Author of In a Sorry State

James Joughin was born and educated in Scotland. He first visited Africa as a student at the University of Edinburgh. He spent the 70s in the Caribbean, the 80s in Papua New Guinea, then returned to Africa, working for the development agencies all across the continent. From the mid-2000s he lived and worked in Uganda. He has published academic papers and occasional journalism. He has been a pamphleteer and a DJ. This is his first novel. He lives in Brighton.